Debra Jean Matheny
February 8 at 11:55am ·
Re-post from Jan. 20 2014, Hibbing Salvation Army connection to the Saarinens who in turn via Glens Great Grandfather Eero Saarinen, Finnish-American architect are further connected to the (FREEMASONS) The Salvation Army USAs founder William Booth! ~MORE TO COME AS I LOCATE IT! On the following Facebook page posted in my 2013 archives are more specifics to the connection my dads sisters kid Rene Saarinen via her husband Glen (who also died suddenly one month after implicating my dads family (sisters) in his murder, which was reported (with the reasonably suspicious details which led me to conclude this) to the Minneapolis FBI. There are many circumstances that reasonably suggest a criminal scheme orchestrated against my dads family (with the exception of his sisters) was masterminded in part by Charlotte Koski and Eugene Scartozzi, my dads youngest sister and her husbands family, aided and abetted by James Andrew Borland aka Andy Borland within the Fairview Health Services Industry, spanning 17+ years, involving the MURDER of many Koski family members! Some of that info is posted on my other blog My Story of Organized Stalking, Corruption and Domestic Terrorism Over a decade of gang stalking in colossal proportion. Recently each time I go to locate that archived info, the page freezes or the internet disconnects. The page is public and I encourage you to view the 2013 posts related to the Saarinen connection to the Illuminati run Hibbing Minnesota Salvation Army. 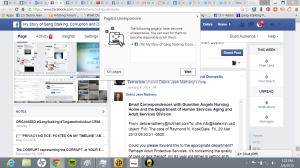 My Story of Gang Stalking, Corruption and Domestic Terrorism
More interesting sh!t concerning my disowned family members. My cousin Rene Saarinen’s now deceased (suspicious 1 month following my dads murder) husband, Glen Saarinen, has familial ties a century a fore to the co-founder of the Salvation Army. I saw Renee at the Hibbing Salvation Army speaking with Nancy Massich 1 month prior to my fathers murder!